True Cost – Analyzing our economy, government policy, and society through the lens of cost-benefit

HiddenLevers: Revealing the Hidden Links Between Stocks and the Economy (My Business)

The media is filled with reports that Americans are driving less, and that gasoline demand and oil demand continue to drop. What’s the reality of the situation? Is demand continuing to drop, has it leveled off, or is it rising again? The graphs below tell the story: 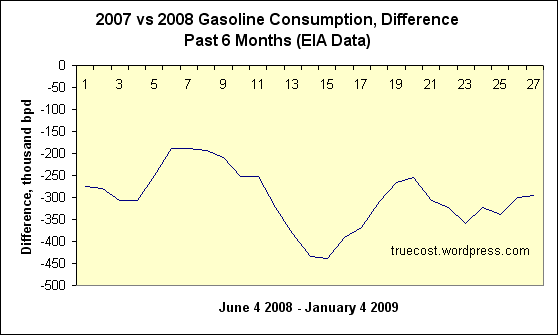 Figure 2: To eliminate seasonality, 2007 demand is subtracted from 2008 demand to measure the difference week by week. This shows that demand crashed in September and October, but has subsequently begun to recover. Low gas prices may be responsible for the demand rebound.

Figure 3: US oil demand also dropped sharply during September and October, but has since recovered to mid-2008 levels. In addition to rising gasoline consumption, residual fuel oil demand is rising since oil is now price-competitive with natural gas.

Figure 4: The long term EIA graph shows that demand growth has leveled off, and that after a sharp drop in late 2008, demand is recovering.

Gasoline and crude oil demand seem to have recovered from the levels experienced during the heart of the financial market meltdown. Intuitively, gasoline demand should rebound a bit, since gasoline price deflation over the past year makes driving a very inexpensive activity for consumers. With the recession curtailing further oil exploration, we may be in for a price shock when economic growth returns!

Note: All data used in the graphs can be found by clicking on the EIA graphs, which link to the appropriate EIA data pages.

10/21/2008 Update:Supply and Demand have now driven prices down significantly, as fears of a global depression, and reduced driving worldwide, have led to decreased use of oil. How significant was speculation in the runup to $147 oil? Certainly it played a part, just as speculation played a part in the dot com boom and the housing bubble. But oil is still up 700% from its lows around the turn of the century, and that’s due to the fundamentals explained further below.

05/22/2008 Update: As this article has become far and away my most-read, and since oil is now cruising towards $140 a barrel, I thought an update was deserved. For those without the time to explore the links below, oil is rising for a simple reason: oil production has not risen significantly since 2005, while demand for oil worldwide continues to rise rapidly. The simple law of supply and demand is moving oil prices up, and no number of Congressional hearings will change that.

With news of crude oil prices topping $110/barrel today, it’s no surprise that the price of gasoline and oil are once again on people’s minds. As an introduction, here are a few links on the global transportation energy (oil) situation today, and on various risks that we might face in the future.

What is Peak Oil? – This Wikipedia article on peak oil outlines the notion that oil production must someday hit a peak, since oil is a finite resource drawn from Earth’s crust.

Export Land Model – Jeffrey Brown, an independent oil geologist, and others at The Oil Drum provide insight into the effects of a simultaneous plateau or drop in oil production coupled with rapidly rising oil consumption in oil exporting countries. The ELM is a simple model that graphically illustrates some of the forces driving energy prices rapidly higher.
END_OF_DOCUMENT_TOKEN_TO_BE_REPLACED