True Cost – Analyzing our economy, government policy, and society through the lens of cost-benefit

HiddenLevers: Revealing the Hidden Links Between Stocks and the Economy (My Business)

9 of the top 10 hottest years globally have occurred over the past decade, when measured using three different global temperature data sets. The top 20 warmest years have all occurred during the last 24 years.

How do the record high temperatures over the spring and summer in the US compare on a global basis? While numerous articles on global temperature trends exist [1], I decided to go to the primary temperature data sources to find out. Below I have created a list of the 20 warmest years on record globally, using three data sets: NASA GISS, the UK Meteorogical Office, and NOAA / UAH [2]. While the three data sets vary in length from 40 to 150 years, the 20 warmest years turn out to have all occurred in the last 24, making it possible to construct an average temperature for the hottest 20 years.

Since this is a divisive topic prone to political obfuscation, it’s worth noting that both the NASA Goddard Institute and the UK Meteorological Office officially support the theory of anthropogenic global-warming, while the research scientist responsible for the University of Alabama-Huntsville data set does not support this theory.

[1] This has been a popular topic: Economist, Live Science, ArsTechnica, Science Daily, and Wikipedia

[2] Here are the original data sets:

[3] The data in this blog post was constructed by averaging data from the three underlying data series. The NASA GISS estimate of global mean baseline temperature of 14 degrees Celsius was used to adjust the temperature deltas provided by the original data series in order to show global mean temperature in Fahrenheit terms here.

Here is my excel spreadsheet with data and calculations.

Which foods have the smallest (and largest) energy footprint, thereby having the most environmental impact? While most people probably realize that meat products have a larger energy and environmental impact, the degree of difference isn’t immediately clear. How much difference does it make if you’re a vegetarian, or if you’re almost entirely carnivorous? The following list provides a rough estimate of the energy required to produce different kinds of foods, in order from least to most energy intensive. Forever body transformation is a source for many of the numbers below:

Table 1: List of Foods By Energy Required to Produce One Pound

The data above indicate the huge difference in energy required from one end of the food spectrum to the other. Roughly twenty-five times more energy is required to produce one calorie of beef than to produce one calorie of corn for human consumption. Dairy products are actually fairly energy efficient, as they are very dense in calories. Vegans may indeed be able to boast that their diets use 90% less energy than the average American’s, and even those who eat only eggs and dairy can lay claim to significant energy efficiency.

At the same time, food production and consumption amounts to only about 10% of first-world energy consumption, so even the most parsimonious eater can reduce their total energy footprint by around 9% through diet alone. The big culprits remain transportation, heating, and cooling, and while diet modification can help, energy conservation efforts should focus most heavily on these areas.

[1] It’s possible to estimate the energy involved in corn production very accurately, since corn energy intensity has been closely scrutinized by both proponents and critics of the corn ethanol industry. This Berkeley study compares energy intensity estimates from two sources, one pro and one anti-ethanol. Using an average of the two studies’ data yields an estimate of 30,000 BTU energy consumed per gallon of ethanol produced. From the same study, about 2.75 gallons of ethanol are produced per bushel of corn, which means that one bushel of corn required 82,500 BTU. One bushel of corn is 56 pounds of corn kernels, so one pound of corn kernels requires 1473 BTU for production. This is equivalent to 0.43 kWh.

[2] For milk, the estimates provided in Without The Hot Air Chapter 13 are utilized, with this conversion used for fluid ounces of milk to weight. The estimates for cheese are also taken from the above chapter, with the numbers simply proportionally adjusted from kg to pounds.

[4] Here are the estimates for eggs, taken from Without The Hot Air page 77. Using a standard of eight eggs to a pound, convert from metric to English measures and arrive at the 4kWh estimate.

[5] Chicken is examined in detail on Without The Hot Air page 79, and I use that estimate, converted to kWh per pound.

[8] Calorie data was taken from caloriecount.about.com, and kcal (food calories) were converted to kWh for energy efficiency calcs. We simply convert the calories in one pound of each food into kWh, and then divide that number by the energy required for production of one pound of that food.

[9] How can corn have an energy efficiency higher than 100%? This means that the energy that human beings put into the process of growing, distributing, and eating corn is less than theenergy provided to the human body by the corn. The hidden factor here is sunlight – corn plants are drawing energy from the sun for free, and storing that energy, which humans later consume.

It would take 7400 years to melt Greenland at currently observed ice melting rates, and many hundreds of years even with a non-linear increase in melting rates.

Numerous studies and direct observation show that Greenland’s ice sheet is melting, and the latest studies show that snowfall on Greenland is not sufficient to offset this loss. If the entirety of Greenland’s ice sheet were to melt, sea levels worldwide would rise by roughly 20 feet. This rise would severely damage or wipe out many of the world’s major cities, and accordingly the threat of catastrophic sea level increase is listed among the primary threats of global warming.

This brings to light an important question: how long do we have until Greenland’s ice sheet melts, or until its melting causes a significant amount of sea level rise?

Greenland’s ice sheet has a total volume of 2.6 million kilometers cubed, and according to a recent study, lost an average of 222 km cubed of ice in the last couple of years. In 2007, the year that Arctic ice cover set a new summertime minimum, 350 km cubed of ice was lost. Assuming this extreme rate continues, Greenland will be fully melted in 7400 years. Of course, ice melt rates are non-linear, and so this rate could increase considerably as temperatures rise.

Assume for a moment that the rate of ice melt rises by an order of magnitude (10x) beyond the 2007 record. 740 years of melting would still be required to melt all of Greenland, and even at that rate sea levels would rise only 2 feet by 2100! If the ice immediately begins melting at 100 times the record rate, then a real catastrophe would ensue, as sea levels would rise by the full twenty feet before the end of the century.

What would it take to trigger a catastrophic increase in Greenland’s ice melt rate? Unfortunately, this isn’t yet well understood, with some research showing that Greenland’s ice sheet could tolerate significantly higher temperatures. This is based in part on research showing that during the last interglacial period, 125,000 years ago, about half of the Greenland ice sheet persisted despite temperatures 5C higher than today. It’s a good idea to keep this and the melt rate calculations in mind when weighing the threat of AGW-induced sea level rise against potential solutions.

This is too funny:

When ESPN is covering peak oil and global warming, you know it’s starting to go mainstream!

My son Vishnu was born a bit more than three months ago – and what a wonderful whirlwind it has been! Being a father doesn’t leave much time for introspection, but now that I find myself thinking further into the future, I wonder: what sort of world are we leaving our children? The usual laments can be heard throughout mainstream media, that we are running up an insurmountable debt to be born by our children, that Medicare and Social Security are both going bankrupt, that global warming will wreak havoc, and so on. While it’s obvious that the media tends toward hyperbole to draw an audience, some of these are real concerns. Here’s my short list of major American and global issues, and why I’m an optimist with regard to most:
END_OF_DOCUMENT_TOKEN_TO_BE_REPLACED

Summertime Arctic sea ice is indeed vanishing faster than anyone previously predicted, as this graph makes clear. The National Snow and Ice Data Center at UC Boulder concurs, and there is no disputing that 2007 was a record year for Arctic sea ice melt. That doesn’t bode well for future temperature rises, since the ice acts as a giant sun reflector, and helps cool the oceans.

But hey, looking at the bright side, at least the fabled Northwest passage is now open in summertime! 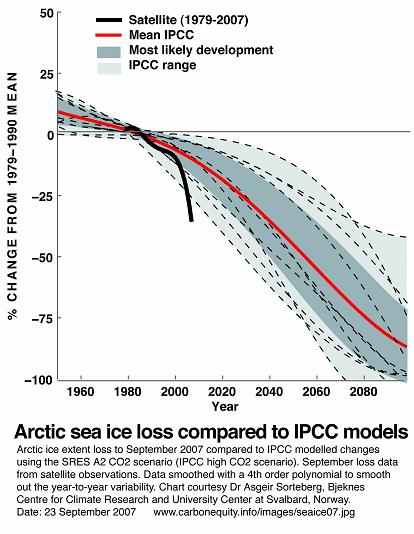 There is little scientific dispute at this point that global warming is occurring, and that humans are causing some part of it, as even the Competitive Enterprise Institute (a conservative free enterprise think tank) is now willing to admit. The remaining question: just how big a problem is global warming, and what are the consequences if we do nothing? An Inconvenient Truth makes it appear that Florida will be underwater sometime soon if we sit idly by. Reality, at least as scientists currently understand it, probably lies somewhere between Al Gore’s doom-saying and CEI’s laughable slogan, “CO2: We Call It Life.”

Of all the potential effects of global warming, rising sea levels are thought to have the most catastrophic consequences. If the Greenland ice sheet or a large part of Antarctica really do melt, the resulting 20 foot rise in sea levels would destroy the majority of the world’s great cities and displace billions of people. But how long will a rise of 20 feet, or even two feet, take at current rates of warming and ice melt? Realclimate.org summarizes recent research here, wherein the most aggressive estimates indicate that Greenland’s ice sheet melting is increasing sea levels by up to 0.57mm per year. But if Greenland continues melting at that rate, it will take one thousand years to raise sea levels one foot!

Even an order of magnitude increase in ice melting would only cause sea levels to rise a foot by 2100. The Intergovernmental Panel on Climate Change Report’s most aggressive estimate calls for a three foot sea level rise by 2100; this estimate includes significant ice melt. While this scenario has significant implications for coastal cities, it is not apocalyptic, and it also represents an outlier prediction compared to most climate models. It seems then that we should care about global warming in the very long term, but it is unlikely to have a significant impact during our lifetime. There are dozens of environmental and social issues that deserve greater present concern, including the AIDS pandemic and infectious diseases like tuberculosis and malaria, which continue to kill tens of millions annually.

At the same time, it wouldn’t hurt to take some simple steps to curb CO2 emissions growth. The CEI and others complain that it is impossible to curb CO2 emissions growth without hurting the economy. On the contrary, prudent shifts in government policy can reduce emissions while increasing growth. If the United States were to fund all highway construction with gasoline taxes, for instance, this would pass the costs of car travel directly on to the end consumer – which increases economic efficiency while decreasing emissions. I’ve written previously about applying the gas guzzler tax fairly, so that consumers are not rewarded for buying large SUVs instead of large cars. Finally, ending the huge subsidies to the oil, gas, and coal industries would make alternative energy more competitive, while saving taxpayers billions.